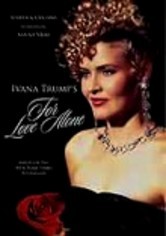 1996 NR 1h 34m DVD
When beautiful young Czechoslovakian ski prodigy Katrinka Kovár (Sanna Vraa) meets a wealthy American businessman (Stephen Collins), she's swept away by his glamorous lifestyle. But the dark shadow of a long-hidden secret from her past threatens to ruin their love affair. Based on her best-selling novel and inspired by her personal experiences, this high-society drama features a cameo appearance by Ivana Trump and co-stars Madeline Kahn.