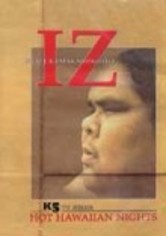 1993 NR 0h 50m DVD
Pull up your beach chair and relax as you listen to the melodies of Israel "Iz" Kamakawiwo'ole and his band, considered a leading influence in contemporary Hawaiian music. Iz filmed these two concerts in 1993 and 1995 -- just two years before his untimely death -- and they aired as part of KHNL-TV's "Hot Hawaiian Nights" series. Songs include "Ka Huila Wai," "Panini Pua Kea," "Living in a Sovereign Land," "Tengoku Kara Kaminare" and more.