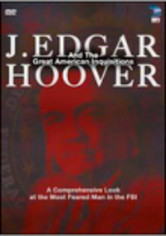 2005 NR 1h 33m DVD
As director of the FBI for more than 40 years, J. Edgar Hoover served under a record eight presidents and oversaw thousands of investigations against individuals he deemed anti-American, including actors, politicians and members of protest groups. This fascinating documentary applies a critical eye to Hoover's legacy with a special focus on his penchant for propaganda, preying on Americans' fears of communism to achieve his personal aims.