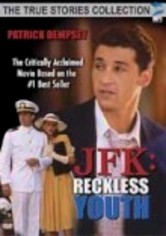 1993 NR 3h 3m DVD
Originally produced as a television miniseries based on the best-selling book by Nigel Hamilton, this nostalgic biopic records the first 30 years of a young John F. Kennedy (Patrick Dempsey) -- before the presidency came knocking. From Kennedy's affair with a beautiful journalist (Yolanda Jilot) who was believed to be a Nazi spy to his ongoing feud with his father (Terry Kinney), this drama captures the makings of a complex and controversial man.