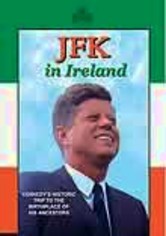 1996 NR 0h 42m DVD
On a pilgrimage to his ancestral homeland in June 1963, John F. Kennedy -- the United States' first Irish Catholic president -- was treated like royalty; this documentary captures that historic visit. In addition to covering Kennedy's tour of the Emerald Isle, this nostalgic program also serves as a time capsule of some of the president's most triumphant moments before his tragic death that would come just five months later.