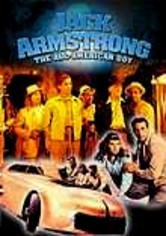 1947 NR 2 discs
John Hart stars as titular all-American hero Jack Armstrong in this 15-chapter serial based on the popular radio program of the 1930s and '40s. The series follows the adventures of Jack, Uncle Jim, Betty and Billy as they attempt to rescue a scientist who's kidnapped and held prisoner on a remote island by villains aiming to steal the scientist's miraculous new invention. Rosemary La Planche co-stars.