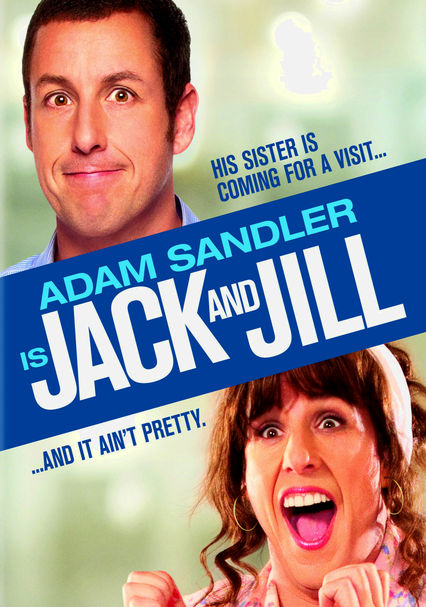 2011 PG 1h 31m Blu-ray / DVD
Adam Sandler pulls double duty as family man Jack and his overbearing twin sister, Jill, who settles in over the holidays for an extended stay. Her visit was supposed to be temporary ... but now it feels painfully permanent.

Parents need to know that, like all Adam Sandler movies aimed at families, Jack and Jill includes lots of potty humor and crude jokes at the expense of women who don't fit the Hollywood ideal of beauty. Since Sandler plays both Jack and his twin sister, Jill, the movie "allows" him to make many jokes about women's bodies and personalities -- not to mention bodily functions. There's also plenty of insult language ("freak," "stupid," "loser," etc.), some suggestive comments/humor, and an extended sequence featuring a stereotypical Mexican family that may offend some viewers. Parents concerned with commercialism should note that the comedy is chock-full of product placements, from Sony (which is also the movie's distributor) to Dunkin Donuts and many, many more.

Pacino makes lots of suggestive overtures toward Jill, and Felipe also flirts with her. Jill's full-figure bras and control-top panties are shown on more than one occasion for laughs. Jack and his wife hug and are shown in bed together, but they're just getting ready to sleep.

Slapstick and physical comedy throughout: Jack's son punches his Aunt Jill, and she falls off her chair. Jack, disguised as Jill, shoves and hits Al Pacino, and he retaliates. Jill punches a bathroom attendant, who goes flying through a bathroom door.

"Hell," "crap," "oh my God," and insults ranging from "freak" and "annoying" to "loser" and "stupid." Jill, who's rather sheltered, makes tactless comments (she wonders if a bearded man is Al Qaeda, etc.).

Although Jack and Jill's positive message is overshadowed by the many gross-out gags and fart jokes -- not to mention the many jokes made at others' expense (especially women who don't fit the "accepted" standard of beauty) -- there are some take-aways about the importance of family, friendship, and not taking your siblings for granted.

Like many of Sandler's movies, there are nonstop product placements and corporate tie-ins. The sequence on the cruise feels like an extended commercial for Royal Caribbean and its ship. Everyone uses Sony computers (Sony is also distributing the film); Pepto and Dunkin Donuts aren't just prominently featured -- the companies are Jack's clients, and fake commercials the brands are shown in the movie. Other tie-ins include The Price Is Right, YouTube, Craigslist, Morton's Steakhouse, online dating sites like Match.com and eHarmony, and celebrity cameos.

Adults are shown at dinner parties with wine or champagne on the table, but it's not overt.