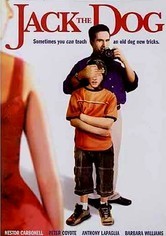 2001 NR 1h 25m DVD
Aptly nicknamed "Jack the Dog" for his womanizing ways, married photographer Jack (Nestor Carbonell) spends much of his time trying to hide his affairs from his wife, Faith (Barbara Williams), who finally gets fed up and walks out on him. Forced to face his faults while raising his young son, Sam (Andrew J. Ferchland), alone, Jack soon learns some important life lessons in this moving indie comedy.