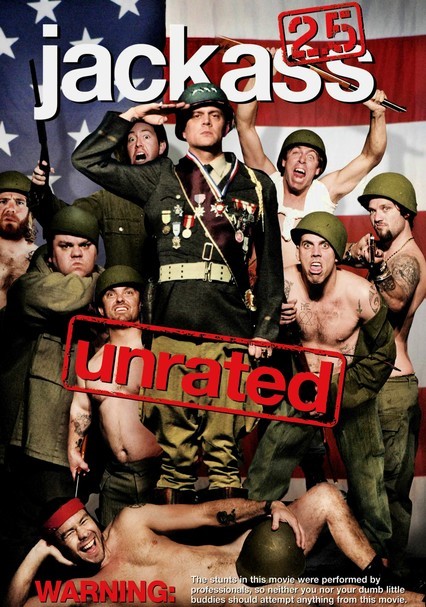 2007 UR 1h 4m DVD
Johnny Knoxville, Steve-O and the entire Jackass crew return with even more inappropriate and reckless stunts, pranks and mischief in this film that combines extra scenes from Jackass 2 with behind-the-scenes footage and exclusive interviews.

Parents need to know that they can expect more of the usual from the Jackass crew this time around: dangerous and often downright stupid stunts and pranks (like seeing how hard a snapping turtle will bite their nose or whether baby powder can be used to show the precise moment flatulence leaves the body). This DVD is compiled from material leftover from Jackass: Number Two, so it tends to be lower-concept stuff that the filmmakers rejected for the theatrically released movie. Expect shots of naked butts, male genitalia (and penis posters and T-shirts), men drinking or being sprayed with urine, a man able to defecate at will for the camera, a nude morbidly obese woman sitting on Wee Man (who is a Little Person), and more. Oh, and incessant swearing, too.

No sex, but several glimpses of male genitalia, both real and displayed on T-shirts, posters, etc. Even more frequent shots of the crew bare-bottomed, including lots of close-ups of the guys inserting things in their anuses. In one scene, a naked morbidly obese woman is momentarily lowered onto a nearly nude Wee Man for skit.

Since this is "B" material leftover from Jackass: Number Two, there's actually a tad less violence in the stunts, but they're obviously still dangerous. The crew is hurt in all sorts of creative ways, especially in the crotch or buttocks. One guy lies down on a bed of nails with snakes on top of him. Another guy tries to fly a kite out of his buttocks, etc. And one guy is able to defecate on cue. There are also other relatively tame pranks.

These guys aren't trying to make any sort of statement with their stunts; they just seem to enjoy putting themselves in disgusting or dangerous situations. How they're considered "professionals" is still a mystery. While a couple of the skits tested various crew members' limits, they never seem upset afterward.

In addition to Jackass and its MTV spin-off Wildboyz, the film features Bam's Lamborghini.

Preston takes four Xanax to perform a skit; the crew drinks on set and discusses being drunk.