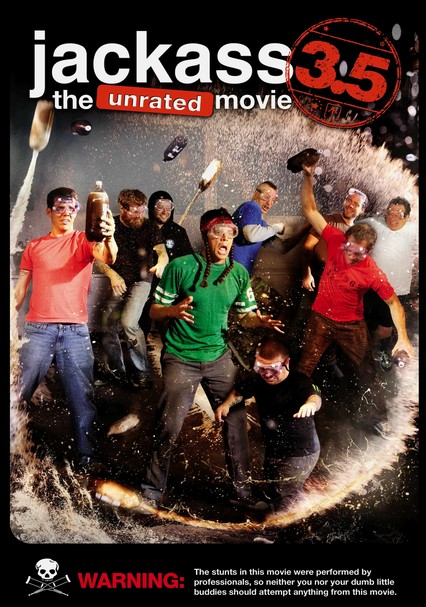 Parents need to know that Jackass 3.5 is a direct-to-DVD collection of outtakes and leftovers from the successful Jackass 3D and is similar to the previous Jackass movies and the hit TV series. Led by Johnny Knoxville and his cast of misfits, the film is a nonstop deluge of idiotic stunts, practical jokes, and scatological/gross-out humor. From beginning to end, it's filled with punching and hitting, self-inflicted violence, and all kinds of bodily fluids (including on-screen urination, as well as full-frontal male nudity). When they're not swearing up a storm (including "f--k" and "s--t"), cast members laugh cruelly at one another's pain. The movie comes with a warning not to try any of this stuff at home, but parents can only hope.

Tons of self-inflicted violence and mean-spirited practical jokes. The subjects get smashed in the face and in the groin with various objects. Cast members hit and punch each other. Several stunts result in painful-looking falls and crashes. Cast members are burned and zapped with electric shocks. There are fewer bodily fluids on display in this entry in the series, but some blood is seen.

There are no positive messages here. The featured behavior is mean-spirited, destructive, and dangerous. The movie does come with a warning for viewers not to try any of the stunts at home.

While there's a long list of sponsors in the credits, brand names are hardly referenced on screen.

A cast member is shown to have something of a drinking problem. When drunk, he gets out of control, assumes another personality ("Darf"), and acts like a complete jerk. Viewers see blurry video footage of this. The cast members react angrily to him.