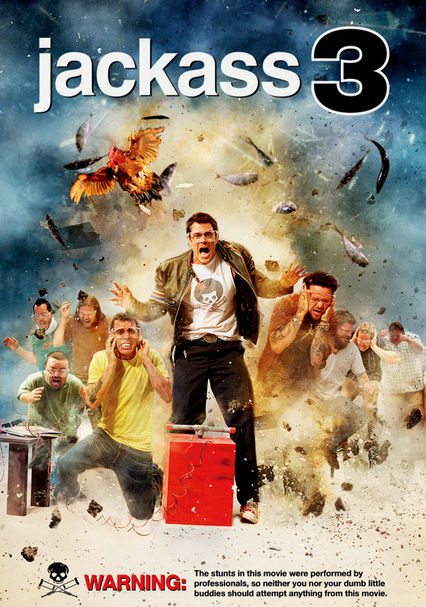 2010 UR 1h 40m Blu-ray / DVD
Johnny Knoxville -- the original Jackass himself -- returns after a long hiatus and subjects himself to all-new stunts involving wild animals, dangerous heights and other perils guaranteed to do him bodily harm.

Parents need to know that Jackass 3-D is the third movie based on the hit TV series and the first one in 3-D -- which makes everything that much more in your face. Led by Johnny Knoxville and his cast of misfits, the film is a non-stop deluge of idiotic stunts, practical jokes, and scatological/gross-out humor. From beginning to end, it's filled with punching and hitting, self-inflicted violence, and all kinds of bodily fluids and excrement (including on-screen urination and defecation, as well as full-frontal male nudity). When they're not swearing up a storm (including "f--k" and "s--t"), cast members laugh cruelly at one another's pain. The movie comes with a warning not to try any of this stuff at home, but parents can only hope.

Tons of self-inflicted violence and mean-spirited practical jokes. The subjects get smashed in the face and in the groin with various objects, as well as covered with various bodily fluids and excrement. Characters hit and punch each other. Several stunts result in painful-looking falls and crashes. Several animals and creatures (bulls, buffalo, a ram, scorpions, bees, etc.) attack the subjects. Some blood is seen (especially in a painful tooth-pulling sequence).

There are no positive messages here. The featured behavior is mean-spirited, destructive, and dangerous. The movie does come with a warning for viewers not to try any of these stunts at home.

While there's a long list of sponsors in the credits, brand names are hardly referenced onscreen.

Cast members drink one swallow of beer during a prank in a bar.