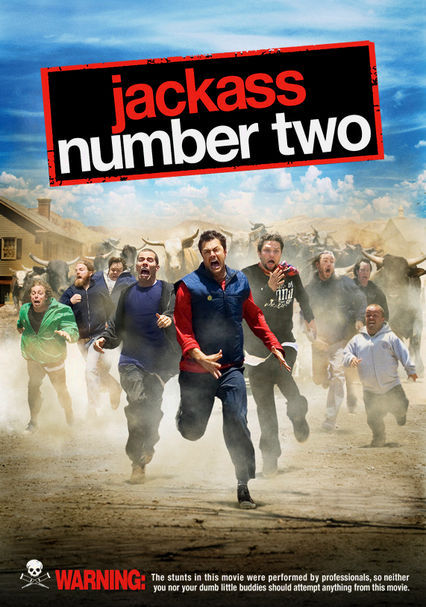 2006 UR 1h 32m DVD
Johnny Knoxville, Bam Margera and the rest of the crew continue to shun dignity and embrace danger in this no-holds-barred sequel that keeps the gross-out factor high with stunts involving leeches, horse semen and more as the gang travels to India.

Parents need to know that this entire film is a series of physically and emotionally abusive pranks and stunts. They're designed for laughs (and the cast members do frequently laugh at each other's pain and antics), but they're also often plainly harmful, producing blood, bruises, and burns. Violence includes falls, vehicle and body collisions, snake bites, charging bulls, and people being punched, hit, kicked, and crashing through glass. Nudity is also rampant, including shots of naked rear ends, male genitalia, and a naked woman. One player's mother appears in bed with a man who's not her husband (the joke is on her) -- she wears a nightdress, he's in his underpants. A man appears in old-lady drag, exposing "her" droopy breasts to passers-by, who are duly upset. Language includes relentless use of "f--k," as well as other obscenities. Some cigarette-smoking and beer-drinking.

Viewers are warned not to try the stunts at home, but that doesn't make up for the fact that these guys are poster boys for terrible behavior. They constantly fight with and taunt each other and make fun of others. Some of their pranks are designed to shock or alarm other people. The cast is virtually entirely male.

At this point, Jackass is its own brand name, with T-shirts, DVDs, and other products available.

Smoking cigarettes, drinking beers. In one skit, Knoxville-as-Grandpa pretends to have his "grandson" both smoke and drink from a bottle (in a paper bag) in a public place, enraging onlookers.