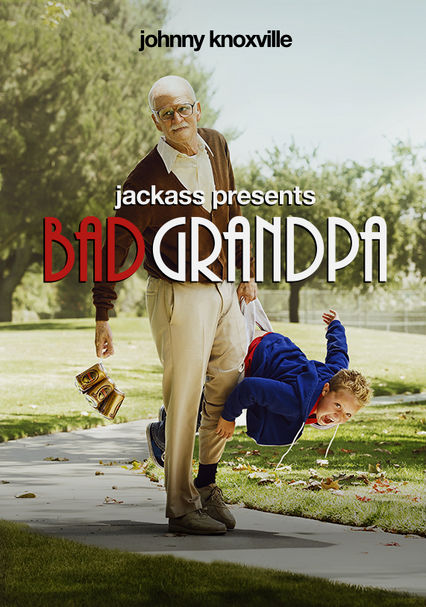 Parents need to know that Bad Grandpa is the latest comedy from Johnny Knoxville and the Jackass crew. Rather than unrelated stunts, this one has a loose story and characters upon which to hang its hidden-camera pranks. The overall tone is lighter, less offensive and with more heart, although parents should keep in mind that the level of vulgarity and sexual innuendo is still very high. There are a few "stunts," some arguing and fighting, and an old lady's supposed corpse that's dragged around throughout the movie. There are some sensitive, albeit fake rubber body parts shown and very strong, constant sexual innuendo (grandpa is forever trying and failing to pick up women). Language is strong and varied, but not constant; it includes "s--t," "f--k," and "p---y," as well as most other words. The eight year-old actor says some of these words and drinks beer in one scene ("Grandpa, I'm f--king wasted..."). Grandpa is shown drinking, and drunk, fairly often.

The movie shows Grandpa's fake, rubber penis stuck in a vending machine (it stretches as he tries to pull it out), as well as some fake, rubber testicles that hang down from beneath his tighty-whity underpants. A fake fish with human genitalia is shown. During the end credits, grandpa shows his rear from a car window. One scene takes place in a strip bar, with suggestive male dancers, but no nudity is shown. Mostly, the movie is filled with constant innuendo as grandpa tries (and fails) to pick up women. He uses all kinds of highly vulgar terms, pick-up lines, and stories. Many of these appear to be spoken in front of his eight year-old co-star. The characters also read magazines with ads and photos that feature strong sexual innuendo.

This movie has less than the usual amount of dangerous "Jackass"-type stunts, though there are a few, such as when grandpa tries to fix a kiddie ride and finds himself catapulted through a store window. There's also some arguing and fighting, and some angry bystanders who don't know that they're being fooled. In one scene, a barroom full of "Hell's Angel"-types look about ready to beat up one of the actors. Grandpa's wife dies in the first scene, and her "corpse" (played by Spike Jonze) is carried around, dropped, stuffed in a trunk, and thrown off a bridge.

Firstly, this movie exposes (or seemingly exposes) an 8-year-old boy to all kinds of strong language, sex talk and sexual innuendo, stereotyping, alcohol, robbery, dead bodies, and all around bad behavior. But on the other hand, the grandpa and boy eventually do form a real family bond, and even though they continue their negative behavior to some extent at the end, they seem to have formed a strong unit.

Most product names appear to be shown by accident. A Pepsi can is prominent in a couple of shots during a bingo game. One scene takes place in a convenience store, where many brand names are visible on the shelves.

In one scene, grandpa drinks a six-pack of beer with the boy (trying to get a rise out of passersby). The boy spits out the beer but appears to drink more. At one point, he says, "Grandpa, I'm f--king wasted." In a few other scenes, grandpa is shown drinking, and drunk; his beverages include beer and margaritas. In an early scene, the boy's biological father is shown smoking a bong during a Skype chat.