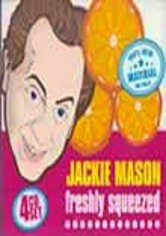 2004 NR 1h 47m DVD
Irascible comedian Jackie Mason debuts his seventh one-man comedy show, "Jackie Mason: Freshly Squeezed." Armed with all-new material, the master funnyman is back on stage in this preview show filmed live in Canada. The show focuses on -- among other things -- terrorism, status symbols, cell-phones, fearless leaders, critics and politics. Jackie is at his best delivering topical humor that can only come from a true master of comedy.