Jacob: The Man Who Fought with God 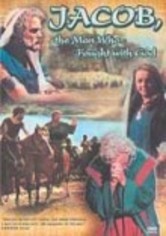 Jacob: The Man Who Fought with God

1963 NR 1h 45m DVD
In Marcello Baldi's stirring biblical film, mother Rebekah tricks her husband, Isaac, into blessing son Jacob instead of their firstborn, Esau. Enraged, the elder boy vows to kill his brother, forcing Jacob to flee for his life. Years later, after starting his own family, Jacob receives a message from God, who tells the estranged sibling to return to his homeland. Fosco Giacchei, Luisa Della Noce and Jean Mercier star.