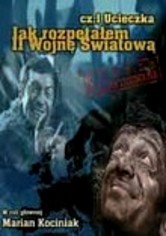 1970 NR 1h 15m DVD
The second part of this epic World War II comedy follows the misadventures of Polish Pvt. Franek Dolas (Marian Kociniak), who finds his ship under attack by a Nazi U-boat. After being saved by the French, it's on to the Foreign Legion in Syria before he's captured by the British and liberated by the Italians, who mistake him for an English spy. His only hope now is to dress up as a nurse and take a group of injured soldiers back to Italy.