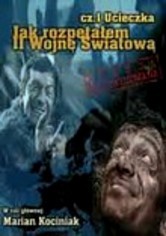 1970 NR 1h 15m DVD
The third installment of this epic World War II comedy finds Polish Pvt. Franek Dolas (Marian Kociniak) posing as a nurse to help a group of injured Italian soldiers get back to their native land. But when their party is captured by Germans, who mistake Dolas for a Nazi deserter and promptly send him to the eastern front, it's not such a bad thing, really. After all, now he finally has a chance to get back home!