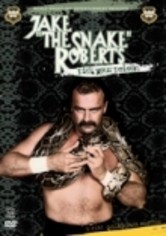 2005 NR 2 discs
Through the better part of two decades, pro wrestler Jake "The Snake" Roberts reigned as perhaps &NFithe&NFi_; biggest and most controversial superstar in the WWE phalanx of grapplers, mixing it up with such legends as Hulk Hogan, "Macho Man" Randy Savage, Ricky Steamboat and Ultimate Warrior. But drug and alcohol abuse eventually took a heavy toll. This documentary chronicles Roberts's highs and lows via interviews and 10 of his most memorable matches.