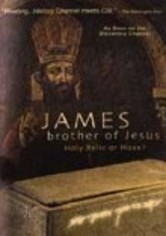 2003 NR 0h 51m DVD
This Discovery Channel documentary examines evidence that may prove the existence of Jesus Christ and his brother, James: an ancient stone ossuary owned by a private collector and believed by some to be nearly 2,000 years old. The video looks at the results of scientific testing and why many experts dispute the authenticity of the bone box, which has an Aramaic inscription that reads, "James, son of Joseph; brother of Jesus."