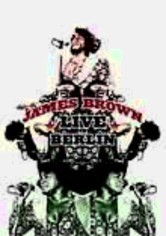 1988 NR 1h 0m DVD
The Godfather of Soul took East Berlin by storm when he filmed a concert there in 1988. Performing such hits as "Living in America" (the 1987 Grammy winner for best R&B male vocal performance), "Prisoner of Love" and "Get Up Offa That Thing," the Hardest Working Man in Show Business really gets his groove on behind the Iron Curtain. Also included is a discography of Brown's singles chronicling his illustrious career.