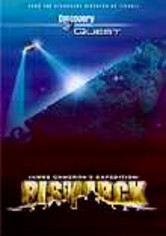 2002 NR 1h 34m DVD
This engaging documentary takes viewers on another adventure on the high seas with filmmaker James Cameron -- but this time, he and Earthship TV are on an expedition to unearth the mysteries of the German battleship Bismarck. The vessel was stranded deep in the Atlantic Ocean after sinking during battle in 1941. The film, which first aired on the Discovery Channel, puts a human face to a maritime tragedy of titanic proportions.