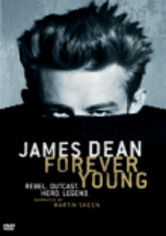 2005 PG-13 1h 28m DVD
Although he starred in just three films before his tragic death in 1955, James Dean managed to sink his teeth into the souls of American audiences and leave a lasting impression. This fascinating documentary narrated by Martin Sheen (who credits the late actor for inspiring his own career) sheds light on the brief life of the timeless Hollywood icon, illuminating a short-lived career that left the moviegoing public wanting more.