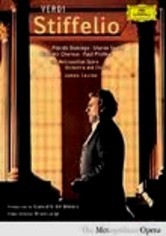 1993 NR 1h 56m DVD
Giuseppe Verdi's opera of religion, revenge and redemption gets the star treatment in this 1993 Metropolitan Opera production conducted by James Levine and starring Plácido Domingo as the cuckolded man of God at the center of the tale. Sharon Sweet sings the role of Domingo's adulteress wife and Vladimir Chernov plays the vengeful father in this rarely staged gem directed by Giancarlo del Monaco and filmed by Brian Large.