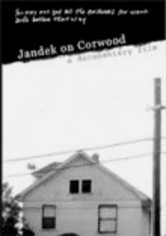 2003 NR 1h 28m DVD
Hidden from the spotlight, Jandek has released almost 30 records since 1978 -- but who is he? The avant-garde musician hides from the spotlight -- no live performances, no interviews -- and yet a tribute album celebrates his songs. This documentary reveals facts and facets of the enigmatic musician via candid interviews with friends, critics and colleagues. Extras include a video tour of Jandek's world, articles and plenty of Jandek music.