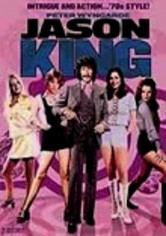 1971 NR 7 discs
Going solo after his service with Interpol's Department S, former agent Jason King (Peter Wyngarde) tries his hand at writing adventure novels about his alter ego, Mark Caine. Between pressures from his publisher, Nicola (Anne Sharp), and the real-life adventures that encroach on his time, it's a wonder King can get any writing done at all. Smooth, sophisticated and ready for action, King was an icon of British television in the early 1970s.