Jason Stuart: Making It to the Middle 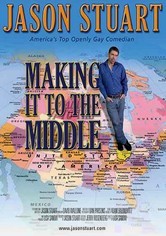 Jason Stuart: Making It to the Middle

2007 NR 0h 54m DVD
Openly gay comic Jason Stuart -- a funnyman actor who's appeared on "Will & Grace" and "My Wife and Kids" -- heads to the middle of the country in the middle of his life to elicit laughs from a variety of audiences. Whether you're gay or straight, you're bound to be entertained by Stuart's act, which includes stories about his crazy family, his Jewish background and why he thinks the pope is just "fabulous!"