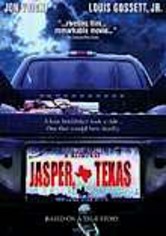 2003 R 1h 54m DVD
In 1998, Jasper, Tex., was the location of the horrific murder of an African-American man named James Byrd Jr. (Roy T. Anderson), who was brutally dragged to his death at the hands of three white men who tied him to a pickup truck. With media swarming around, white sheriff Billy Rowles (Jon Voight) and black mayor R.C. Horn (Louis Gossett Jr.) try to come to terms with the ghastly crime while the town threatens to erupt from racial friction.