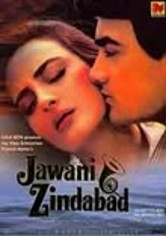 1990 NR 2h 40m DVD
After idealist Shashi (Aamir Khan) takes a stand against traditional marriage dowries, angry elders vow to destroy the young man and his family in this romantic drama. Shashi marries off his sister Rama (Rohini), but her new in-laws (Utpal Dutt, Farha Naaz) are furious that she didn't pay them a dowry. To put an end to the marriage, Rama's in-laws plot her ruin, and when she's accused of a serious crime, it's up to Shashi to prove her innocence.