Jaws of the Pacific 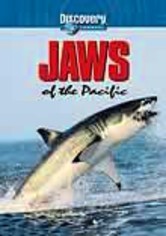 Jaws of the Pacific

2003 NR 0h 50m DVD
Recently, oceanographers and other marine scientists discovered that great white sharks can cover long distances -- as much as 43 miles each day -- as part of their migratory patterns. But researchers were stumped; they knew neither the sharks' ultimate destination nor why the species would journey so far. This educational film documents the scientists' attempts to answer their puzzling questions as they track the dangerous predators.