Jay Cutler: A Cut Above 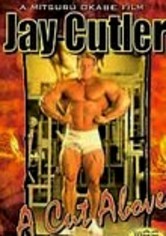 Jay Cutler: A Cut Above

2006 NR 1h 25m DVD
Go behind the scenes with bodybuilder and 2006 Mr. Olympia winner Jay Cutler as he prepares for the 1999 Mr. Olympia competition. This exclusive look at the champion follows the IFBB star as he trains for the event, revealing the intensity of his workout routine and his customized nutrition program. Also included is an interview that Cutler recorded immediately following the 2000 Mr. Olympia competition.