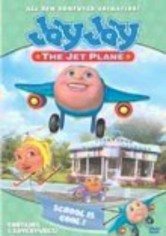 2001 NR 1h 5m DVD
Lovable delivery plane Jay Jay and his mates aren't too cool for school in this educational children's television series. Aimed at the toddler crowd, the high-flying, computer-animated shows teach tykes about the world around them while conveying valuable moral lessons along the way. Kids will love the engaging tales that feature a host of colorful characters, including aircraft mechanic Brenda Blue and Tuffy the Tiny Tow Truck.