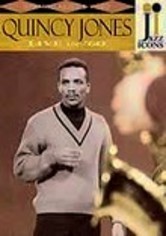 1960 NR 1h 20m DVD
Shot in Switzerland and Belgium in 1960, this immaculately recorded big band concert shows composer-arranger Quincy Jones at the peak of his powers on 17 songs with an 18-piece orchestra including Clark Terry, Phil Woods, Sahib Shihab, Budd Johnson and Benny Bailey. Tracks include "I Remember Clifford," "Walkin'," "Moanin'," "Lester Leaps In," "The Gypsy," "Tickle Toe," "Birth of a Band," "Everybody's Blues" and more.