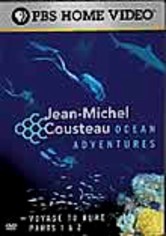 2005 NR 2h 0m DVD
Jean-Michel Cousteau, son of famed marine explorer Jacques-Yves Cousteau, continues his father's legacy of education and preservation with this fascinating series of six specials filmed for high-definition television. Episodes include the two-part "Voyage to Kure," which takes viewers to the remote Northwest Hawaiian Archipelago, and "The Gray Whale Obstacle Course," which follows the endangered animals from Baja, California, to the Bering Sea.