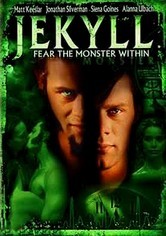 2007 NR 1h 35m DVD
In a 21st-century twist on the Robert Louis Stevenson novella, cancer researcher Henry Jekyll (Matt Keeslar) creates a digital avatar of the dark side of his personality, but when he downloads it into his brain, a hedonistic rampage ensues. The alternate persona at first imperils his marriage and friendships -- and then embarks on a deadlier path. Jonathan Silverman and Alanna Ubach co-star.