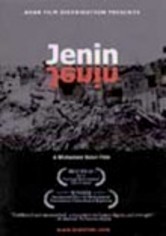 2003 NR 0h 54m DVD
Mohammed Bakri helms this gritty documentary about Jenin, a Palestinian refugee camp that came under Israeli fire in April 2002. During the Israeli army's "Defensive Wall" operation, the camp and its surrounding area fell subject to intense fighting. The confrontation resulted in the deaths of countless Palestinian civilians, and many watch groups later regarded the incident as an Israeli war crime.