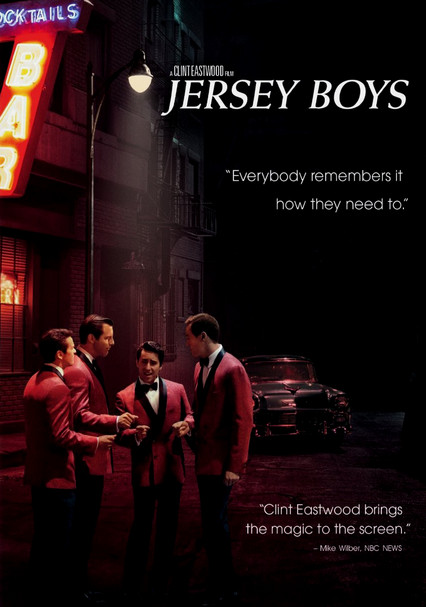 2014 R 2h 14m Blu-ray / DVD
Adapted from the hit Broadway musical, this nostalgic look at the Four Seasons and their bumpy offstage lives stretches across four decades. Each of the musical act's four original members presents a different set of memories from their shared past.

Parents need to know that Jersey Boys -- a heartwarming, catchy, moving musical about the rise of singer Frankie Valli and the Four Seasons -- hews closely to the Broadway production it's based on. Expect plenty of period-accurate smoking and drinking, as well as lots of swearing (everything from "f--k" and "s--t" to "a--hole"), but although the movie touches on mature themes -- working for the Mob, losing your virginity, the death of a child -- it's neither graphic nor gratuitous in either violence or sexual content (there's no nudity). Teens are shown trying to pull off heists, and one man is seemingly shot at point blank. One character in particular is also in and out of jail, and the female characters aren't very deep, but ultimately there are worthy messages about loyalty, commitment, and hard work.

Sexual innuendoes fly, and a man loses his virginity while his friends are outside a hotel room, waiting for him. Some kissing and verbal come-ons, but no nudity.

A man breaks a chair on a table; another draws a gun and fakes shooting someone (it looks frighteningly real). Friends fight loudly, and sometimes the verbal spats morph into physical ones. A character alludes to the death of a loved one via overdose. Men talk about women dismissively; a TV clip is shown of a man slapping a woman, and those watching it cheer. Heated arguments between a husband and wife in front of a child. A teenager dies; the funeral is shown.

A line from the movie says it all: "You want to turn things around? You gotta keep working." The film has a strong message about the value of putting one foot in front of the other day after day, doing the work and doing it well in order to make your dreams come true. The importance of loyalty rings loud and clear, too, as well as keeping your commitments.

Some period signage for Chivas Regal, Coke, Beefeater, and more.

Plenty of era-accurate smoking and drinking, mostly in bars. One character drinks too much, sometimes in front of her kids. There's an allusion to the death of a young woman via drug overdose.