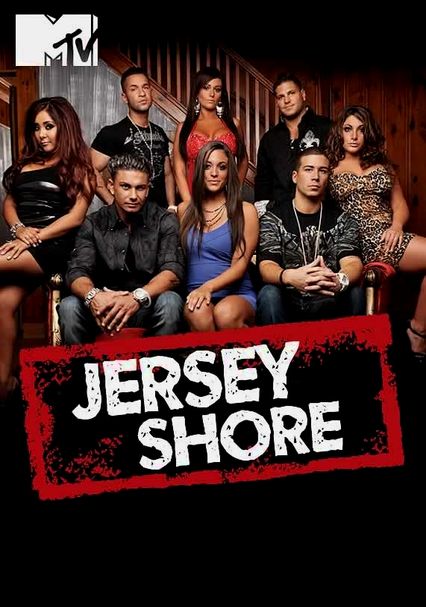 2009 TV-14 4 seasons
Take a trip on the wild side with this notorious reality series that chronicles the hookups, fights and other booze-fueled dramas that erupt among a group of pals living and loving the summer away on New Jersey's ocean-front vacationland.

Snooki, the Situation and the rest of the Jersey Shore crew head to sunny Miami Beach for another season of drinking, tanning, smushing and fighting. Sammi and Ron's relationship drives the rest of the roommates crazy, and Angela decides to leave.

Juicier than ever, the wild reality drama is back in Seaside Heights as the rowdy crew -- Snooki, The Situation, JWoww, Pauly D, Sammi, Ronnie and Vinny -- returns to the shore, without Angelina, to mix it up with new roommate and Snooki BF, Deena.

The Situation, Snooki and the rest of the crew leave the Jersey Shore behind and export their tans to the Old Country, where they hope to explore their heritage, heat up the drama and maybe find a gym or two.

Parents need to know that the this racy MTV reality series includes many negative stereotypes about Italian Americans. The cast members are proud of their heritage, but they choose to "celebrate" their ethnicity by engaging in extremely inappropriate behavior -- from swearing like sailors (the strongest words are bleeped) to engaging in bar brawls and other physical altercations. Conversations about sex are endless, cast members are shown hooking up (all nudity is blurred), and they drink frequently -- which often leads to throwing up and/or promiscious behavior. Bottom line? These aren't the kind of young adults you want your teens looking up to in any way.

The cast endlessly talks about having sex. Women are frequently shown in G-strings and other revealing outfits, while men are often shirtless or in their underwear. Club scenes include lots of butt shaking, grinding, and racy dancing. Sexual activity ranges from kissing (including same-sex making out) to people in bed reaching for each other's genitals; all nudity is blurred.

Contains the expected yelling, insult hurling, and arguing between housemates. There are also occasional brawls at clubs (including shoving and punching), and at least one instance in which a man punches a woman in the face (though footage of the actual punch was edited out of the final broadcast, it was included in promos, and its aftereffects are discussed). Some of the cast members say that physically fighting is an acceptable way of resolving problems.

The show's premise revolves around crude stereotypical images of and behavior attributed to Italian Americans. As with many other reality shows, the series also sends negative messages about what constitutes responsible behavior, the consequences of drinking and casual sex, etc.

Drinking is frequent and excessive. Hard alcohol (gin, vodka) is visible. People get drunk on a regular basis and are often shown engaging in promiscuous behavior while drunk and/or throwing up due to intoxication. Cigarette smoking is sometimes visible.