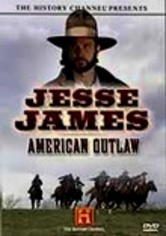 2007 NR 1h 34m DVD
One of the most infamous antiheroes the world has ever known, Jesse James is America's favorite outlaw. This in-depth documentary on the notorious gunslinger draws on the expertise of several noted historians to separate fact from fiction. Presented by The History Channel, the lavish production goes to great lengths to paint a full picture of the controversial legend and unravel the mystery surrounding his death.