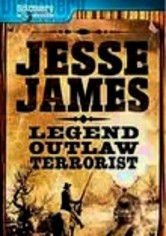 2005 NR 1h 25m DVD
One of the most controversial figures in U.S. history, Jesse James has captured the imagination of the world for more than a century. Teen guerilla fighter, Civil War soldier, notorious bandit, James holds a place in popular legend like no other. Through expert accounts, historic analysis and forensic science, this revealing exposé traces the outlaw's life from his humble Southern childhood through his rise to infamy and his mysterious death.