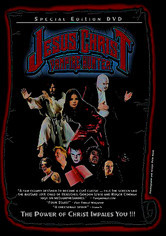 2001 NR 1h 25m Blu-ray / DVD
This indie film garnered awards on the festival circuit, including Slamdance, Zombiedance, the Fargo Film Festival and the Santa Cruz Film Festival. The far-out story has Jesus finally returning to Earth -- but he must contend with a world under assault by a band of vampires. Mary Magnum and the god of Mexican wrestling, El Santos, help Jesus fight evil in this oddball horror-comedy.