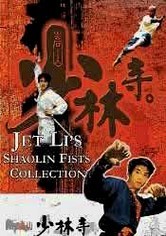 2008 NR 2 discs
Kung fu star Jet Li shares the secrets of the Shaolin Temple in this collection of 10 hard-hitting films, including Li's Shaolin Fists, showing his early training, and Shaolin Pao Quan, which offers a peek at the temple's most dangerous style. Other standouts in this compilation show Li trying to stop a mob hit in Beijing Bodyguard; using a mystical weapon in Shaolin Meteor Hammer; and learning a rare technique in Shaolin 7 Star Fist.