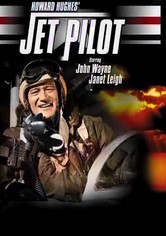 1957 G 1h 53m DVD
John Wayne stars as U.S. Air Force aviator Jim Shannon, who's tasked with escorting a Soviet pilot (Janet Leigh) claiming -- at the height of the Cold War -- that she wants to defect. After falling in love with and wedding the fetching flyer, Shannon learns from his superiors that she's a spy on a mission to extract military secrets. To save his new wife from prison and deportation, Shannon devises a risky plan in this 1957 drama.