Jewel: Live at Humphrey's by the Bay 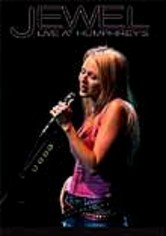 Jewel: Live at Humphrey's by the Bay

2004 NR 1h 0m DVD
Shot in 2001 to complement Jewel's "This Way" album, this video (her first one showcasing a live concert) demonstrates her infectious folk rock style. Featured tracks include "Break Me," "The New Wild West," "Grey Matter," "Who Will Save Your Soul" and "You Were Meant for Me." Bonus features include three additional live songs, an "On the Road" video that captures light moments behind the scenes and a previously unseen interview.