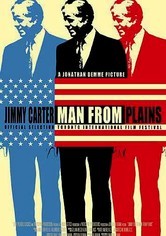 2007 PG 2h 6m DVD
Hollywood director Jonathan Demme tackles the documentary form in this intimate portrait of Jimmy Carter, explicating the former president's view of the Israeli-Palestinian conflict by shadowing him on his national book tour. During the publicity junket, Carter is accused of being a liar, a bigot and an anti-Semite. But his candid responses to the controversy and criticism reveal the Nobel Peace Prize winner's true character.