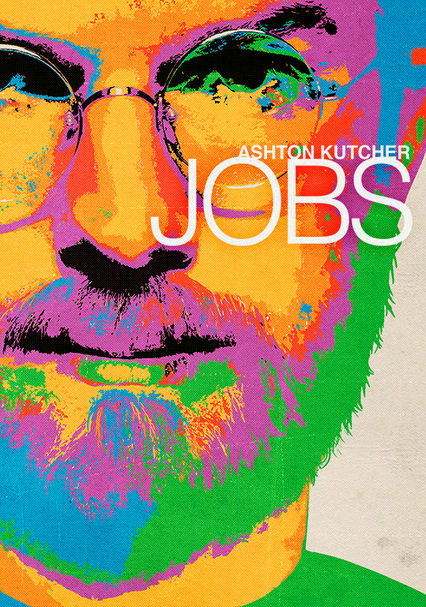 2013 PG-13 2h 2m Blu-ray / DVD
Ashton Kutcher delivers a tour de force performance as Apple founder Steve Jobs in this biopic that spans three decades of the entrepreneur's life. The story follows Jobs from the obscurity of a Palo Alto garage to global fame as a technology icon.

Parents need to know that Jobs is a biopic about late Apple founder/CEO Steve Jobs. As a young man, Jobs smokes marijuana and experiments with hallucinogens, and other characters drink and smoke. Two of Jobs' romances are depicted -- a one-night stand and his long-term college relationship. He's shown kissing in bed with each of them, but that's it; there's no nudity or graphic content. The language is fairly typical of a mature drama, with the occasional use of "s--t," "a--hole," and one "f--king." Expect countless references to Apple's early product innovations -- both the successes and the failures, from the original Apple computer to the iPod. Several car makes are also featured prominently -- Mercedes, Porsche, Corvette Stingray, Volvo, and more. Ultimately, this movie is likely to particularly appeal to families and teens interested in technology and Apple devices.

Steve is volatile and yells at people -- including his pregnant girlfriend. He also throws things a couple of times.

The message of Steve Jobs' life is that, to be innovative, you have to commit to a greater vision than just making money -- you have to set out to change the way people live and, in the case of technology, to merge it with design and beauty. But the message is also that a life that's only about work isn't completely fulfilled.

Since the movie chronicles the history of Apple, it features detailed conversations about various Apple products, ads, town hall speeches, and more -- from the original Apple II to the Macintosh to the pivotal iPod reveal. Jobs' cars are also depicted: a Volvo wagon, a Porsche, a Stingray, a Mercedes. Apple's competitors IBM and Microsoft are mentioned, and the Apple CEO is lured from Pepsi. Rod drives a Harley Davidson motorcycle, and Steve once worked at Atari.

Steve and his friends do drugs (marijuana and LSD, which is portrayed as a mind-enhancing experience), particularly while at Reed College. But he stops as he gets older, and later he criticizes a friend for always smoking pot and not being focused on the business. Rod smokes cigarettes.