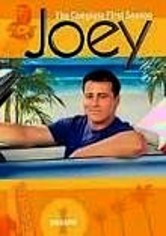 2004 NR 4 discs
Matt LeBlanc reprises his "Friends" role as the charming but dimwitted Joey Tribbiani in this spin-off sitcom. Leaving New York City to pursue a Tinseltown career, Joey reconnects with his sister (Drea de Matteo) and moves in with her rocket scientist son, Michael (Paulo Costanzo). The two have plenty of adventures -- and soon discover that the combination of Michael's brain and Joey's people skills makes them unstoppable.

Parents need to know that this series is essentially for adults. Humor is sometimes shallow and crude. Viewers' mature understanding of sexuality is assumed. Since Joey's sister's breast augmentation is a running topic, the breasts themselves are prominently featured. In the end, the ensemble fails at delivering consistent laughs for teens or parents.

Lots of sexual innuendo; Gina's clothes are often revealing (and her breasts are much discussed); Joey is a ladies' man who gets around; casual sexual relationships.

Mild profanity, such as "damn." Other crude phrases and imagery, especially from Joey's agent.

Some objectification of women. Joey's potential love interests have included two married women (one on the brink of divorce). Joey's sister Gina had her son when she was just 16, but she's a caring mother. Joey often teaches his nephew how to lure women.