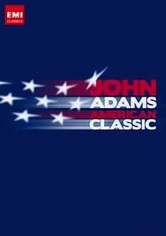 2002 NR 0h 58m DVD
Composer John Adams's symbiotic relationship with American culture unfolds in this documentary that spans his career. Collaborators such as Peter Sellars, Dawn Upshaw and Alice Goodman discuss Adams's talent for music -- and his penchant for courting controversy. The film explores provocative works such as "Nixon and China" and "The Death of Klinghoffer," as well as Adams's earlier material and his attitudes toward America in the new century.