John Cale: An Exploration of His Life and Music 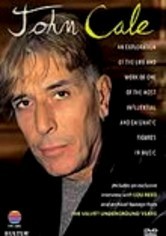 John Cale: An Exploration of His Life and Music

2006 NR 0h 59m DVD
This documentary-style portrait explores the life and career of John Cale, best known as a founding member of the seminal rock band The Velvet Underground and a producer for other artists including Iggy Pop, Patti Smith and Squeeze. Highlights include an exclusive interview with former band mate Lou Reed, with whom he had a sometimes contentious relationship, as well as vintage Velvet Underground performance footage.