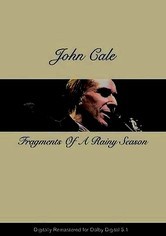 2004 NR 1h 1m DVD
Drawing on the classical music of his upbringing, as well as the rock traditions that served him so well in the Velvet Underground, John Cale has created some highly unique sounds throughout his lengthy career. This concert, shot live in Brussels in 1992, sees Cale working his way through a selection of material that spans most of his solo career. Tracks include "Paris 1919," "On a Wedding Anniversary," "The Ballad of Cable Hogue" and others.