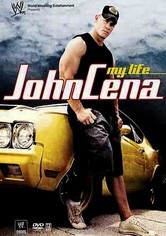 2007 TV-14 3 discs
WWE superstar and fan favorite John Cena reveals what his life is like both in and out of the ring, commenting openly on his successful career, most important matches and fiercest rivalries with the likes of Edge, Triple H and Shawn Michaels. More than just a champion wrestler, Cena, the "Doctor of Thuganomics," has made a name for himself by acting in television and movies and recording a hip-hop album.